skip to main | skip to sidebar

The first things that we do when we are born is that we cry and never we have asked yourself why?

It is because Satan is the one who touch us first,pinched us.At this stage,our mother take great care of us,feed us and she does not sleep when we are sick.She accepts to sacrifice her sleep because of his child and to take good care,upbringing him with everything he wants,clothes,food,education....

When we have already completed studies;start to work;earn a living and then marry.Very often we forget what our parents did for us,we shout at them,do obey them or help them but just to let them live alone or even leave them in a home.

By the time when the child reached in the same situation,he will then realise how his parents suffered and when our time is up in this world,nothing is left.

Our flesh,bones are rotten and our final destination,that is paradise or hell,is based on our deeds."What we sowed,we reap"!!
Posted by Alii527 at 11:52 AM No comments:

Wondering how to shed those extra kilos?

According to researchers,eating eggs for breakfast helps to reduce calorie consumption throughout the day up to 18 per cent.The protein-rich food makes the stomach feel full for longer,cutting the desire to eat more.

Man who consumed an egg-based breakfast ate significantly fewer calories when offered an unlimited lunch buffet compared to when they ate a carbohydrate-rich bagel breakfast of equal calories.

We have a typical breakfast where appetite ratings reveal that a protein-rich breakfast helps to keep hunger at bay.
Posted by Alii527 at 12:24 AM No comments:

The International Accounting Standard Board (IASB) and its US counterpart say there are “no guarantees” they can resolve their differences on key proposals raised in the wake of the global crisis.

The IASB and the US Financial Accounting Standards Board released a joint statement earlier today outlining their progress towards the June 2011 convergence deadline of their two codes.

The board said while they are attempting to reconcile their two approaches on financial instruments – which played a key part in the unraveling of bank finances in the late stages of 2008 – they still hold “differing conclusions on a number of important technical issues”.

The boards blame “different imperatives” and timetables for the differences, but say they will jointly consider each other’s proposals and feedback during the next few months and issue new requirements by March 2011.

In the past, the IASB has indicated it would release bridging guidance, to achieve some level of compatibility with differing US requirements, if full convergence is not achieved.

The US financial regulator, the Securities and Exchanges Commission is still deciding whether it will adopt international accounting rules, and is currently assessing the impact. It said it will reach a final decision by 2011.
Posted by Girish00018 at 10:27 PM No comments:

Unlike parents, friends are those people who you choose. They are those persons on whom you can count on if ever you are in trouble, if you want to share something, cry on that person’s shoulder or simply to spend some time. A friend guides you through your difficult times, helps you take an important decision, warns you about the consequences of your acts and also makes your day if ever you feel down. Friends are the second most important people in one’s life after your parents. They help you choose between what is wrong and what is right. They share your happiness and support you and boost up your morale you during your bad times.

Posted by Subrun Karuna at 2:25 AM No comments:

1990, 1991, two years where probably most of us ACCA students were born. But do you know what happened in those years?

All of you probably have already heard about it, but never paid attention.

The Gulf War took place between Iraq and a coalition of Middle Eastern and Western powers led by the United States. The Iraqi army was lead by Saddam Hussein and the American by U.S. President George H. W. Bush. Reminds you of anything? Yes the same Saddam Hussein that was involved in the 2003 war between America and Iraq and the son of the 1990’s U.S. President, George W. Bush

The Gulf war was caused by in the most part by Saddam Hussein's need for oil. He had amassed a huge debt during the Iran-Iraq War that lasted from September 1980 to August 1988 and as a solution to repay the debts back, he decided to invade Kuwait. The Western Powers army then got involved in the war when Kuwait asked for help to be able to get the invaders out of their country.

On February 27, Kuwait City was declared liberated, and with allied forces having driven well into Iraq, President Bush and his advisers decided to halt the war. A cease-fire took effect at 8:00 the following morning and there the war was stopped.

The FIFA WORLD CUP is a competition which has been organised every year since its creation in 1930(except 1942 and 1946 because of World War II). It is one of the most important sporting events in the world. This is because the entire world is allowed to participate whether in the knock out stages or in the main competition. There are 32 teams, all from the different continents which are contesting for that famous trophy. This year’s world cup competition was decided to be organised by South Africa. However, one the most important barriers there is the crime rate. The level of crimes in South Africa has been rising rapidly. In 2008, statistics showed that the number of murders was 14180 and this figure increased to 18148 in 2009. This is no doubt one of the main reasons why tourists are not willing to attend the world cup. According to experts, of the 450000 people expected to come for the world cup, only 300000 will be coming. There are three solutions that can be brought up to try reducing the level of crimes in that country.

The three solutions could be:

One of the most important threats to tourists is certainly muggings and robbery. If serious care is not taken, one could easily fall victim from these crimes. However, this can be minimised by following a simple rule. When the plane of the tourists is landing, the members of the authority could perhaps instruct the latter “not to wear expensive items on the roads”. Therefore the robbers will not be tempted to steal or attack the tourists to get what they want.


2. Not going out too late at night

This would be probably the most important advice to tourists. It is usually at night that the criminals act the most. Conversely, tourists can go out at night but only if they are in groups (perhaps 4-7 people).

This actually is what has been done. 55000 additional police have been hired. However, this is still not enough to remove the fear of becoming a victim for both tourists and residents. For e.g. in the famously poor area of Soweto and Soccer city, where there is one of the most beautiful stadiums in South Africa, the presence of the police force is not felt. To remedy to this situation, the government could perhaps deploy more police forces in the regions where the crime rate is high.

To conclude, I would say that if these three advices are followed, the level of crimes should decrease during the World Cup. However, this is only a short-term action plan that would help control the crime rate. After the World Cup, the government of South Africa should perhaps try implementing more measures against crime to decrease the latter in the long-run. Thus as a result, more and more tourists would come to that country which would boost even more its economy.
Posted by Yash Pareima at 6:13 PM 2 comments: 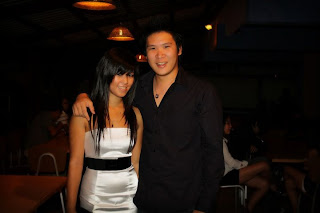 How would you feel if your closest friend left you here in Mauritius and went studying in Australia? For those who did have one person close enough with him/her who went abroad either for emigrating or studying will surely understand me. On hearing what Francois told me last year, I did not really pay attention as I have told myself that there was a long time before he leaves. In fact we have known each other since I was 10 but thanks to the scout, we became friends, unfortunately only at the age of 16.

Now that he is studying in Australia, I feel a bit lonely and mostly sad as he was always there to cheer me up when I was down, helping me for any petty thing; he was the one that was always there to party with me, as foolish and straight forward as me and the most important thing above all is that he understands me. Indeed we did think alike!

The time lag (6 hours) makes it difficult for us to communicate. But I optimistically believe that we can keep in touch. How? It is simply by the internet. I believe that without the internet, many people would not be able to communicate as much as today. Who has never heard of Facebook? A social network, easy to use and accessible 24 hours a day, 7 days a week, all around the world. Moreover Skype, msn and email are the other three sources that help us to keep in touch. As i plan to visit him, hopefully next year , I will have to grab the opportunity to get a part time job because the airline ticket costs about RS25 000 and therefore cannot rely on my parents to pay for it.

People always leave, but still life goes on! And if someday I can afford to travel to Australia I will surely gain experience not only because I will travel for the first time but I will know what it is to work and having his/her own money to satisfy ourselves. Sydney is the place where he lives so I am going to visit him and the capital of Australia itself. Now if our friendship is strong enough, then facebook and skype will keep it alive. But something is for sure,I am going to miss him!